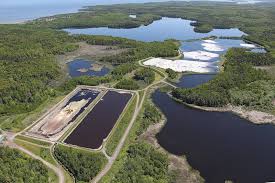 ​
We will be having a short panel discussion featuring professions in a variety of fields of study. They will be discussing a case study on Boat Harbour and the environmental concern regarding Northern Pulp's pumping of effluent into the community's natural environment. Boat Harbour in it's original state was a tidal estuary off the Northumberland Strait immediately opposite of Pictou, Nova Scotia. It is roughly 142 hectares in size, with only a narrow outlet on its northern boundary. The harbor is sheltered from the forces of the open ocean and the resultant ecosystem is highly productive due to the interaction of fresh and salt water. Native salt marshes which once predominated would have mitigated the effects of flooding and provided other ecosystem services. The abundance of diverse fauna and protected location made the area ideal for use by local Mi’kmaq First Nations. For generations the original inhabitants thrived on the abundant food resources and utilized the harbor for fishing and recreation. The environmental degradation of Boat Harbour began in the late 1960's, when Canso chemicals and a pulp mill across the harbor at the adjacent Abercrombie point began discharging industrial effluent to the Northumberland Strait via the estuary. Environmental concerns for the area include the large disposal of chlorine and caustic soda, large mercury addition to the area, and production of many harmful by-products, making Boat Harbour now devoid of any aquatic life. The government of Nova Scotia passed “The Boat Harbour Act” in 2015, a law ordering that the harbour will cease reception and treatment of effluent by 2020. The panel will discuss the various sides of the issue from their perspective. Environmental issue solutions are typically not an easy fix. They require input from groups and people to create a holistic viewpoint. This situation provides a local experience to provoke critical thinking among conference attendees.

For more information, check out the brief case study we have put together. The link to the PDF version is below.

Friends of the Northumberland Strait
Nicole Mackenzie & Krista Fulton
Friends of the Northumberland Strait is a community group which came together because of their concerns about Northern Pulp’s proposed wastewater treatment facility, especially the plan to continuously discharge treated effluent directly into the Strait. Their goal is to create a better future together by protecting the water, air, land and resources of the region, so that they can thrive for many generations. The Group, formed in November 2017, come from all corners of the community and includes business owners, entrepreneurs, tourism operators, fisher folks, cottagers, boaters, and outdoor enthusiasts. The group is volunteer run, by those who want to help people become more informed about this issue, which has the potential to affect our future in so many ways.